It was still hotter than hell July 4th but eventually became tolerable later in the evening. Watched one of the hood kids learn to ride a bike, then with parental unit permission, we walked around the neighborhood to see fireworks. We could see Fairlawn's way off in the distance. Then we got to the corner of Tallmadge and Dayton. Just had my phone with me, as I didn't bother going inside to get my camera, or even put on shoes. Did make the kids put on shoes though.

We got up there and watched their show for awhile. They set off A LOT of fireworks. A cop car came alone, slowed down but didn't stop, and told them to not set off fireworks in the street and to clean up the mess in the street. The guy said "okay", the cops kept going, and they swept all the debris down the storm sewer. After the cops turned the corner, the middle of the street show continued.

Last night the kid's mom had bought them some fireworks and they asked if they could set them off in my front yard. Sure. They had their own July 5th fireworks show. Without even telling them to, they waited til they were totally cooled, then picked up all the debris and threw it away. What kind of kids do that?! THESE kids!!

Yesterday I was about ready to get in tub and saw on twitter that the new blimp had taken off for their maiden flight. Texted my blimp friend, who had checked yesterday and it was still in the hanger; and he rushed out there. I took a quick bath, then hit every red light, or I'd have caught it over headquarters. Instead I waited at the blimp base in Suffield for 90 minutes and yes, IT WAS WORTH IT!!!!!!!!!!!!!!!!!!

Here she comes! They didn't land, they hovered and showed off their new toy! Didn't snag a pix of them waving; but one of the crew was waving out the open window on the door. Door is surrounded by red. And no, not officially is it Wingfoot 3; so it doesn't say that on the gondola yet. It has a German registration until it passes FAA tests, as a German company made her. THIS is absolute total bliss for a blimpologist, hovering for over 5 minutes. I didn't record it all. Almost though.

And off she went to continue testing. Thank you for giving my little black heart some joy!! 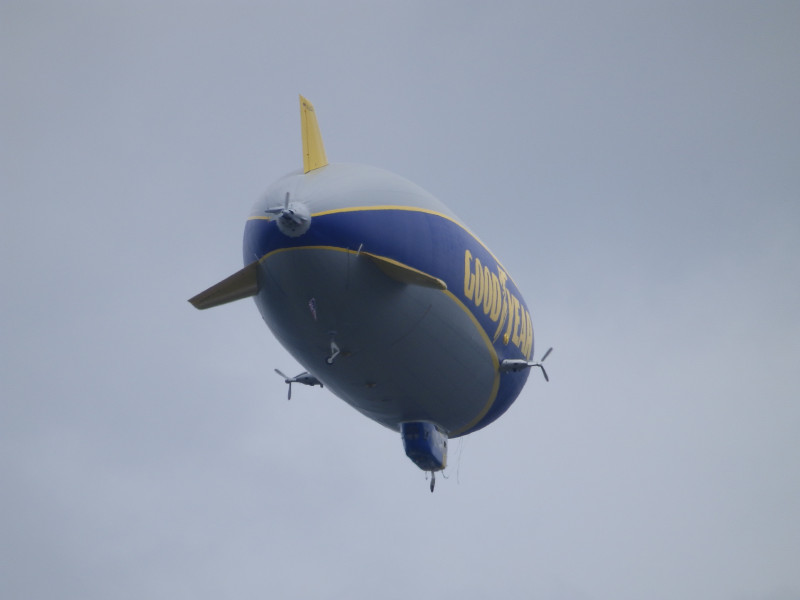 They can't fly around my house yet. They are restricted by FAA to between the base and basically Akron-Canton airport. They have to remain in the SE area for testing. I don't know how/why the FAA determined that flight path. Wingfoot One will be back around July 4! TWO BLIMPS!!!!!!!!!!!!!!!!!!!

Mortimore joined his family members who previously passed today. He was 14. He was buried by his friend Gypsy Boots. The day I finally got Gypsy inside after her initial freak out, he immediately went up to her, laid next to her, and started washing her head. They remained friends til her passing.

He was a very vocal, to the end, beautiful golden boy. Golden in ways more than just color. 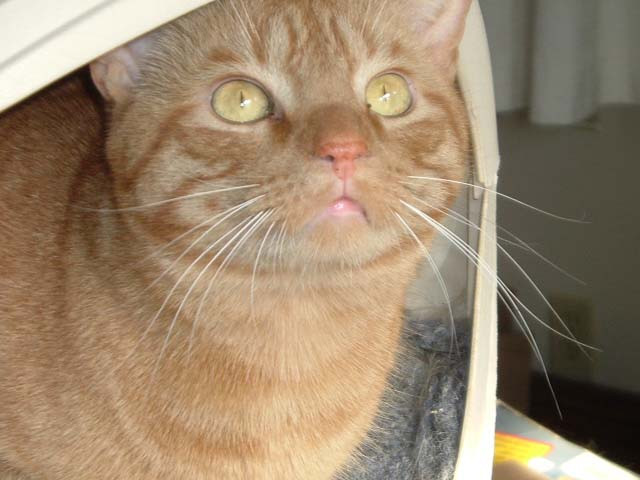 ...learned from an adult neighbor, not Edward, how heroin is sold and used. The adult neighbor had never used it; but knew how it worked. No hood kids were around at this time, as obvious that kind of discussion would not transpire then.

...learned with the hood kids that gackles will kill birds, decapitate them, and eat the head. Why were we learning this? Cuz one found a headless sparrow body. And the robins I had in a nest up front all had been decapitated. We, wrongly, blamed the raccoons. We discovered it was the gackles when we saw sparrows and a robin dive bombing a gackle across the street in the vacant lot. The grass was tall so we didn't know why, then I saw it had a baby sparrow in front of it. The kids chased the gackle off. The baby sparrow was dead; but still had a head. All deceased birds were given an appropriate burial across the street. Then we asked Mr. Google about what in the world was happening, and learned that. I don't get why the head though.

...learned from Edward, yeah I know, that you're not suppose to drive with a neck brace. I was about the 4th car back from the first light by Save-A-Lot and the light turned green. I don't even think I had taken my foot off the break yet and I see a car behind me approaching when I looked in the rearview, the driver wearing a neck brace and he was not slowing down. Impact. MY neck bore the brunt of it. When I got of my car to look at my back bumper and he had gotten out, he no longer had the neck brace off. I thought that very weird; but didn't question it. My car was fine, his license plate was mangled. I said no harm no foul and I had muscle relaxers for my neck. Away we went and I saw him put the neck brace back on. Uh?? Was telling Eddie about that and he said that you aren't suppose to drive with a neck brace because you can't turn your neck to see. That makes sense!! He had a temporary handicapped parking placard too. Eddie said I should have called the police; but there really wasn't a need. The way he's driving he's gonna cause another wreck like the one that probably put him IN the neck brace!!

...soooo summer projects, aside from what I want to do at home personally, which I'm not listing here; the hood kids have given me a list. They want to put hand prints on my house cuz they saw the hand prints on there already and I told them they were from a [then] little boy. Fine, we'll do hand prints on the house. One wants to make slime. Another wants to learn more magic tricks. There's a request for more math, is that even legal for kids to do over the summer?? They have seeds planted in pots already and check on their progress every day. They want to learn about more flowers around here. I'm suppose to watch Peppa [sic?] Pig with them. And there's lots more and amazingly they're simple and nothing fancy, expensive, or 'shiny'. Hood kids keep it real!!

We had a squirt gun fight earlier in the week. We need more squirt guns as not everyone had one.

Kids can't remember Eddie's name so they call him "popsicle" as he hands them out, one per day. They also like to play with his dogs.

Edward got another cell phone today and whereas I had plans to go to Cuyahoga Valley National Park, that was scuppered to deal with his ignorance. Because he cannot READ THE DIRECTIONS ON THE SCREEN!!! My jaw is still aching from the TMJ flare up that caused me. Of course he said I could have went to the park; but how could I knowing I had to deal with his fucking POS cell phone and his inability to ever learn anything?? Then I get thru the set up screens and called the activation number and it wouldn't work!!! You're on your own, I'm done. Call them on the number in the pamphlet. He goes home, then calls me like 20 minutes later cuz he couldn't find the phone number for the new phone--which was in a text message on the POS. They needed the phone #, so he calls and asks me:

Where's my phone number at?
IT IS IN YOUR MESSAGES.
Where's that?
YOU CANNOT READ THE ICONS? LOOK AT THE FUCKING BOTTOM.
Where it says messages?
I AM GOING TO COME OVER WITH MY SLEDGEHAMMER.
Got it. [click]

Then hours later I was over there and he said it wasn't activated earlier cuz they needed more info--it's some tracfone fuckery, cuz you know going to the ATT store would be too easy. But it was working now. But then, get this, he starts: New neighbor reported they saw 2 grown men sit inside a refrigerator box for hours one afternoon. They were not drinking alcohol. They were just sitting in the box facing each other and talking and she found it rather disturbing. My response to this report was to burst out laughing. That didn't really help. I did stop laughing, eventually, and inform them they were in the Land of Misfit Toys and 2 grown men sitting in a refrigerator box was just par for the course around here. I really wish I had seen that!

I think I committed child abuse. Really. Though I'll blame the kids cuz they started it. For almost an hour I helped kids with addition and subtraction. I know, I feel guilty as hell. Math?! I dunno what I was thinking.

Who Killed Allison? by Barry Levine, her boyfriend, in who's arms she died.

When I went to pick a puppeh out of Poliahu's mommy's litter at the foster mom's house. Poli fell asleep in my arms, so um, yeah, she sort of picked me. I got her 3 weeks later. 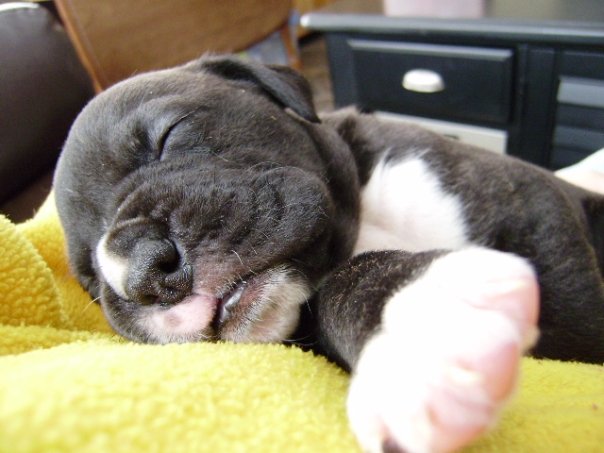 Panacea's pix online from the rescue that snagged my attention. 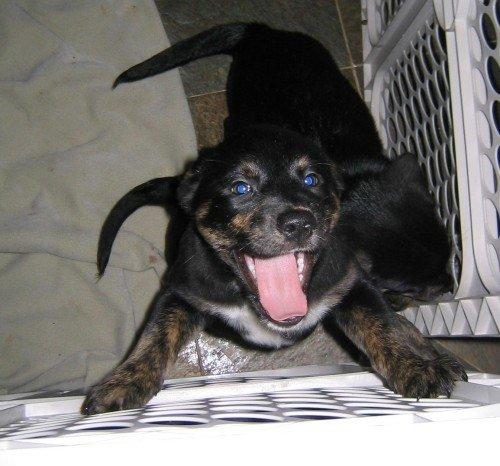 What a wee little bugger Poli was! Pan out with Poli for the 1st time. 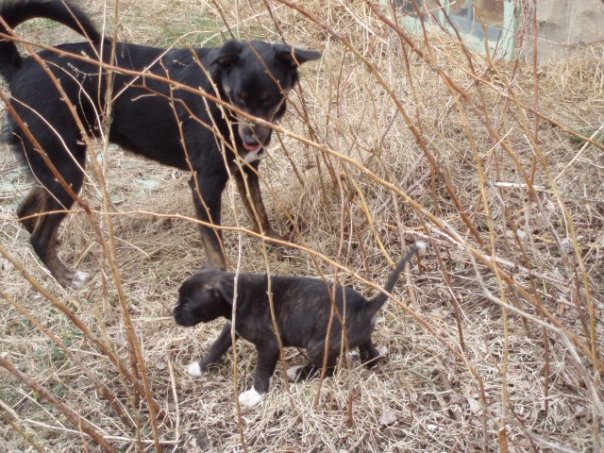 Poli's probably thinking 'what IS she doing?' Pan herded her into the raspberry bushes. 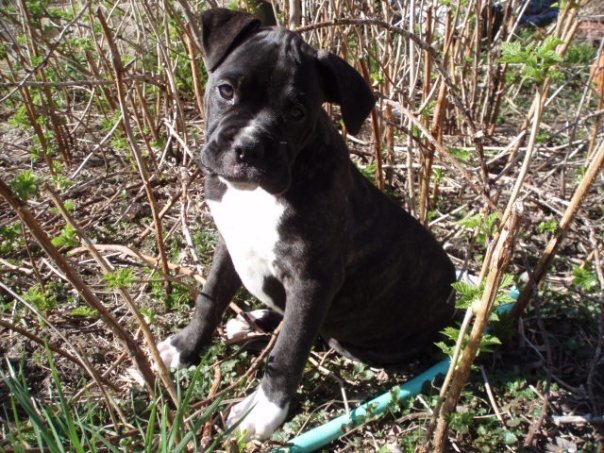 Now it's Poli who outruns Pan. But those little ears up in the air! Awwwwwww.... Photographic proof that Pan IS capable of sharing a toy. A stick is a toy to a dog. Pan will rarely share a toy with Poli, and Poli is fine with that. The few moments she gets with the toy she prances around with it "I got the toy I got the toy". Then Pan takes it back. 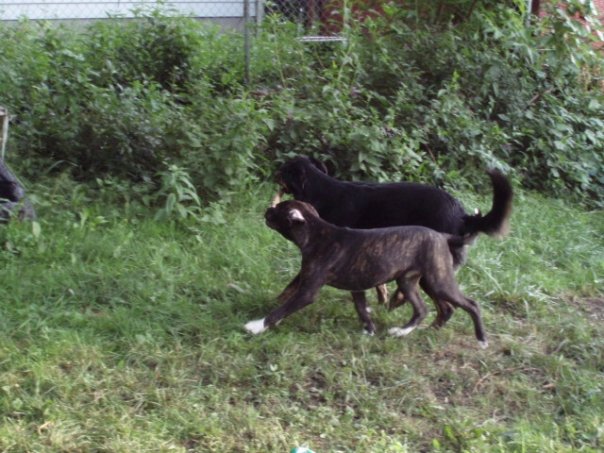 Been up since 4am and yet I think today is gonna be a good day. Hmmm....guess we'll see eh?

EDWARD has called me TWICE today and the last one was PAINFUL!!!! First, was the program to save battery life turning off the music playing on his phone? [since he's using the phone as he's computer is no go--the battery needs replaced, that hell will be done in a few days, it's an internal battery so please pray/send good thoughts to my friend who's going to do that for him] I DO NOT KNOW--TRY IT!

What's my yahoo password?
I dunno
It won't let me in
Isn't it _____________?
No
I have no fucking clue
Don't you check my email
At times yes
On your phone?
Oh fuck no, not your mail
You check mail though
MY gmail account
It said it went to gmail when I didn't know it
WHAT?
It switched to gmail when I didn't know my password
What do you mean?
Yahoo switched to gmail when I didn't know my password
You said that, that's impossible
They asked if I had access to your email but I don't
JFC they sent a code to me, that's NOT SWITCHING TO GMAIL!!
Same difference
NO IT IS NOT!!!!!!!!!!!!!
[I look and there IS a code but it's expired, so I log in to his yahoo mail and change the fucking password for him]
I've changed your email password to what you thought it was
What was it before?
I have no fucking idea
How do I get access to your gmail?
You have access to ME, for now, so therefore you have access to it. Did the password work?
Let me try
[jeopardy music]
I don't like how yahoo looks on my phone
IDGAF did the password work?
Yes, I'm in it
Fine, I'm out [click]
Collapse