My elusive wood nymph Gypsy Boots painlessly was set free today. I rescued her from the trailer park in '03 and she was at least 2 then. She was 100% feral. At the time I rescued her, I was recovering from surgery and watching a lot of dvds from netflix, including Groucho Marx shows. I named her after Robert Bootzin more famously known as Gypsy Boots.

I don't have many photos of her. This was the quickest one I could find. She had the most beautiful green eyes. 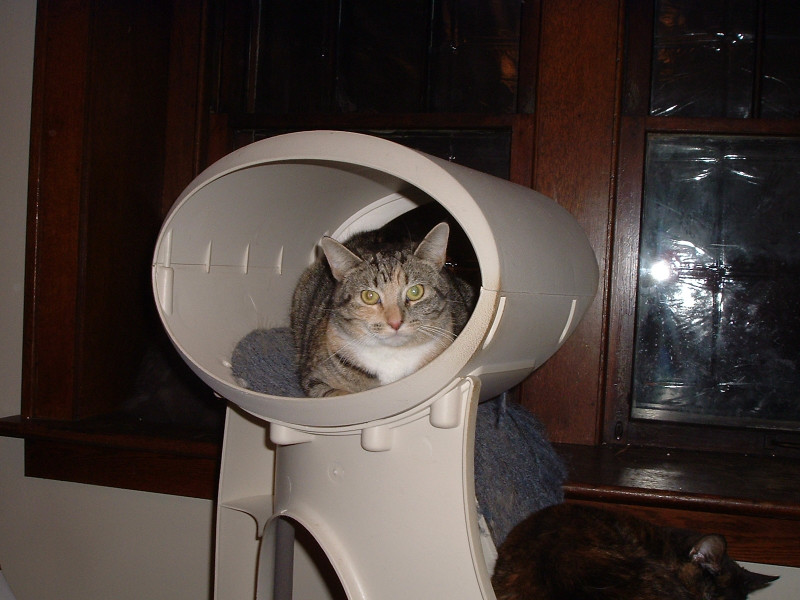 Mortimore was her good friend from day one. She had other kitty friends who have passed away, but Mortimore is still here.

Being feral, it was basically impossible to handle her. It took JT & me 4 hours to get her in a carrier when I moved here and we were wearing heavy work gloves, goggles, and heavy work shirts. We got clawed badly. The last time she was handled was in '05 when we tried to give her worming medicine. She bit my thumb repeatedly, missing my flexor [sic?] tendon by a hair. I ended up getting emergency surgery on my thumb and had this for several weeks, and this went all the way to my elbow. I had 6 stitches in my thumb. 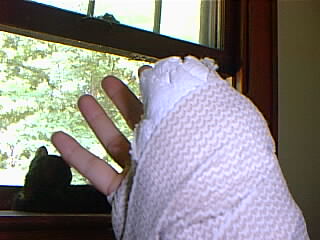 The past few years she hung out upstairs partaking of the canned food with the others. A few weeks ago she went down to the basement and her hidey-hole. I still, obviously, took her food, which she was eating. Until the past few days. Yesterday she was making a gagging motion, not sound, just the motion, after just a bite and her tongue was hanging out. Not panting, just tongue out. Talked to a vet tech and obviously she had a mouth issue. I got her to hiss at me and I saw a mass in there. They can be quick growing.

So this morning, with Eddie on call for back up if need be, I got her in a carrier. I explained to her last night what was happening and apologized in advance for having to traumatize her in the morning but I didn't want her to essentially starve to death and what I was doing was out of love. Yeah, I know; but I talk to my cats. It took me an hour to finally get a hold of her by the scruff, I was bare handed. She tried to bite me, she successfully scratched me, but I got her in the carrier. She was calm as could be once I got her in there.

In an exam room I opened the carrier and she let me pet her! The first time in 14 years. That made me cry more. If she hadn't let me pet her at all, I wouldn't even have petted her after her passing, as I would have respected her wishes. Yes, I know; but I think you should respect someone's or some cat's wishes if possible. She wouldn't have wanted me to pet her normally. I pet her til the doctor came in, then she hid under a bench til she was sedated.

Then she was painlessly set free, my elusive wood nymph Gypsy Boots.